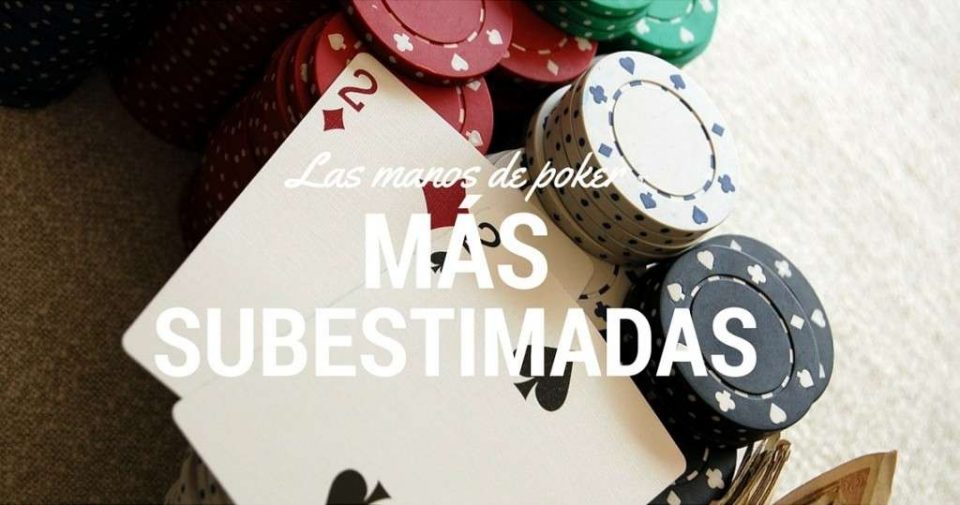 Sure at this point you already know that a Royal Flush or a Straight Flush are the highest value combinations you can get in poker. However, there are others that have come to be underestimated even by the most experienced players, even despite having good odds. What are these poker cinderellas?

Some of the most underrated hands in poker

These are some of the hands whose value sometimes goes under the table. Maybe in your next game you can take advantage of them:

They may be more hands underestimated, but the small pairs  can accomplish great things.

This is what happened when Gus Hansen hit the jackpot of over $ 400,000 during the High Stakes Poker show against Daniel Negreanu.

In summary, both Hansen and Negreanu started with two low pairs, 5 and 6 respectively. Hansen decides to bet and Negreanu accepts the bet preflop. The flop is shown and a nine, a six and a five appear on the table. It is only with the Turn that the five of spades appears that would give Hansen a poker and access to the juicy pot. Negreanu couldn’t believe it!

As we saw in the previous play, when it comes to hands made up of pairs of low numbers, players think twice before playing them or not.

It will be among the most underrated hands, but not for long, next time you have this combination, give it some thought before you fold, it can bring you an unexpected benefit.

Despite having good odds, the J / 9 is considered a fair to poor hand. As its true value can emerge after the flop, it is one of the most underrated hands.

We understand, taking risks is sometimes not that simple. However, combined with the community cards, the J / 9 can create a pair, a flush or a straight, thus becoming even stronger than an A / J.

As an example of how underrated she can be, look at the face of Eric Seidel when Johnny Chan beat him to the WSOP final in 1988 with this play:

Often the 9/8 falls as an average play or lower. But, if you have it the same color, you have as much chance of winning as someone with A / Q or A / 5.

If you are a movie fan, this move may seem familiar to you: it appears in the final scene of the movie “Rounders” with Matt Damon.

Here, Damon’s character has the straight on the flop, but makes his opponent think that his play is not good by passing all the betting rounds. The game ends with all in and, of course, with Damon as the winner.

This can not only happen in the movies, many times everything happens when we decide to remove from the list of the most underrated hands to that combination that we have in front of us. Next time try this strategy with 9/8, you never know when luck may be on your side.

Maybe when you receive this hand you will fold without thinking, but believe us, it is one of the most underrated hands out there, and you can win (quite a bit) with it.

He is included in the list of the least strong, but if luck is on your side, you may have the option of winning with a straight. Of course, the idea of ​​not losing money due to an impulsive decision, be sure to pay close attention to the bets of your opponents, both preflop and on the flop. Depending on the number of players at the table, your odds can increase and decrease.

Finally, we bring you another underrated play made famous by a Hollywood movie, this time played by James Bond at Casino Royale.

Agent 007 shows us the value of the most underrated hands. Although Le Chiffre, his opponent, has everything to win with an A / 6, the 7/5 of the same color has a 2% advantage due to his chances of creating a flush or a straight.

Even with a low hand, Daniel Craig also teaches us the power of good strategy (and a flawless poker face), which ultimately leads to him winning $ 100 million in one game. Don’t miss the full scene below:

And you, what combination would you add to this list of the most underrated hands?

Although above we talked about the most underrated hands in most cases, despite their value, there are other elements to take into account before throwing an all in in poker.

First, consider your position at the table . Your performance will depend on whether you are the first or the last to speak and the information you have when making a decision.

Second, sometimes it is advisable to wait to see the flop . This can give you an answer as to whether or not it is worth continuing the play. Of course, in preflop you can also know the value of 2/3 of the cards, so look at the cost of throwing yourself, maybe you will get a good investment.

If you’re just starting out on your way to poker, check out the  tips and basics we have for you

IT’S ALL IN THE TACTIC: BASIC STRATEGIES FOR PLAYING POKER

The best 3 casinos to have fun in Cancun